What have you remodeled lately? 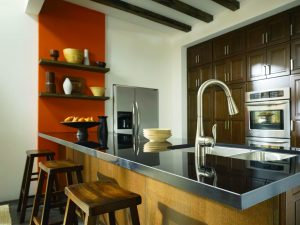 As the economy continues to shift, so does the taste of consumers. But, how are Canadians reacting? Are we more cautious in making new purchases or remodeling endeavors; and how does that affect our spending habits?

Kitchen upgrades still appear to be a top priority for homeowners, says Moen, the number one faucet brand in North America. But with the state of the economy, the company was also curious about homeowner choices and future plans when it comes to remodeling. Interested in both why and how Canadians are spending their hard-earned dollars, the recently conducted online survey queried 1,200 homeowners (age 25 and older) across the country about their remodeling activities throughout the past year and their intent to remodel within the next six months.

“While the economy is improving, consumers are still feeling the impact of the recession,” said Jack Suvak, senior director of research and insights at Moen. “Recent studies conducted by Boston Consulting Group and Bensimon Byrne reveal that one-third of Canadians feel financial insecurity, and only six in 10 consumers believe the economy is growing, a very sharp decrease from just three months ago. With this new information, we wanted to uncover how consumers are now prioritizing their home remodeling projects.”

When it comes to purchasing decisions in the Canadian home, most consumers have experienced a “spend shift,” and are carefully considering spending and weighing needs versus wants. Although 27 percent of homeowners are more optimistic about their future financial improvement, 57 percent of respondents still feel their current financial situation remained unchanged when compared to a year ago, and 27 percent actually feel it’s worse.

“Budgets for entertainment, clothes and dining have already been cut or monitored closely in most households, and 42 percent of consumers plan to reduce non-essential spending throughout 2012,” Suvak said. “It seems even though the recession’s over, there’s still a strong ‘buckle down’ mentality across the country, especially with Gen-Xers (33—45 years old).”

Finding and spending the time and money to complete home remodeling projects may be difficult; but according to the survey, we are still doing both. However, increasing financial stress has caused the number of projects completed to decrease slightly from March 2010. But the reasons why homeowners are remodeling remain the same, compared to one year ago; 85 percent remodel to make their homes fit their lifestyles and 77 percent remodel to increase the value of the property.

“Regardless of their motivations, we’re seeing homeowners take a more planned approach to remodeling by refreshing rooms and undertaking small projects, but still achieving impactful results in terms of both style and functionality,” Suvak explained. “Canadians have embraced this ‘Remodel-Lite’ methodology. They’re spending their hard-earned dollars on items used in their daily lives and are making strategic updates.”

More than half of homeowners completed interior painting (54 percent) or gardening/landscaping projects (61 percent) in the last 12 months. Bathroom and kitchen remodeling activity also remained significant, at 25 and 17 percent, respectively with homeowners bringing the “remodel-lite” mindset to both these rooms:

The future remodeling sentiment of Canadians for major home improvement projects is higher overall when compared to one year ago; however, homeowners plan to invest less money on projects that improve property value and curb appeal.

“The global economic uncertainty might be influencing homeowners’ remodeling budgets,” Suvak points out.

According to the survey, 14 percent of homeowners plan to complete a kitchen remodel soon, with new countertops (62 percent), painting (49 percent) and installing a new faucet (39 percent) on their prominent project to-do list.

The outlook for bathroom projects is also positive, with more than 18 percent planning to remodel within the next six months. Projects topping that list include painting (78 percent), installing a new faucet (62 percent) and adding new lighting (52 percent).

“Canadian homeowners are cautious, yet optimistic, about spending and about their future financial improvement,” Suvak continued. “And our survey confirmed that we still see home remodeling as a key investment strategy. Homeowners are also looking for trusted brands that will increase their projects’ impact on their homes, with long-lasting value and durability. At Moen, we strive to be the brand consumers rely on by developing a wide range of products to fit the needs and lifestyles of all generations.”