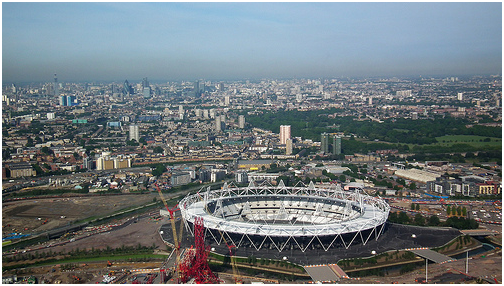 OK – I admit it. I’m a sport-a-holic. Every Saturday I will be at a game, whether it be football or rugby, cricket or tennis, I don’t care. I religiously watch the sports every day on the T.V. To say I am excited about the Olympics would be an understatement.

Sadly, I didn’t win any of the tickets on sale but I am busy entering all the competitions going on at the moment with the hope of winning some for an event – any event, I really don’t care which!

It’s something about the gladiatorial atmosphere; the excitement before a race, team game or a completion is just electric and that’s what I’m addicted to!

I am not alone– it is estimated that 4 billion people worldwide will be watching the 2012 games!

Here are some amazing facts about the hub of the excitement – the Olympic Park.

A Feat of Engineering

The main stadium will be able to accommodate 80,000 people during the Games, cost £500m to build, and needs fourteen lighting towers because it is the very first Olympic Games with high definition television (HD TV) technology, with freeze frame capability to make sure that not a moment of the action is missed.

It is also the lightest Olympic Stadium ever constructed, and a lot of it has been made with recycled building materials. For instance, the support structure for the roof is made from 2,500 tonnes of steel tubing, which began life as gas pipelines.

But even more bizarrely, they made some of the steel structure out of recycled guns and knives!  Confiscated weapons from the Metropolitan Police Department have been given a new lease of life by being melted down for scrap metal, which was then used in the building process! You heard it here first!

Not The First One!

This is the second Olympic Stadium to be built in the UK – but the last one was a bit of a favour. In 1908, Rome were due to host the Games, but had suffered greatly after the eruption of Vesuvius in 1906.

London offered to take over the proceedings, and the Great Stadium was built in Shepherds Bush, costing £60,000 – a paltry sum next to 2012’s price tag!

The 1908 stadium could hold a number of different sports at the venue, including running cycling, swimming and diving, all in the same place.

It stood in London until 1985, when it was then demolished to make way for the BBC’s White City development. You can still see the finishing line as a memorial in the pavement outside to this day.

There are plenty of green features on the 2012 version. The roof might look like heavy duty steel, but it is in fact made of PVC fabric.

This helps to keep the environmental impact and the project costs down, as this part of the structure is due to be dismantled after the Games.

In addition, it is very lightweight, and it is designed to collect the rainwater too – and let’s face it, it’s being held in the British summer time, so that’s guaranteed!

The most sustainable venue in the whole Olympic Park is the velodrome. Highly efficient building processes mean that the roof weighs roughly half of any other existing velodrome in the world. The roof is actually made of 17km of steel cables, making a “net” effect – that is equivalent to 10 miles, or twice the eight of Mount Everest in steel cable!

The designers believe that it will be the fastest indoor cycling track ever built. Well, we’ll find out in August!

Bring it on, I can’t wait! Are you looking forward to it?

Gavin Harvey is a personal trainer and travel enthusiast. He blogs for Cavalok in his spare time.