Design on the Other Side 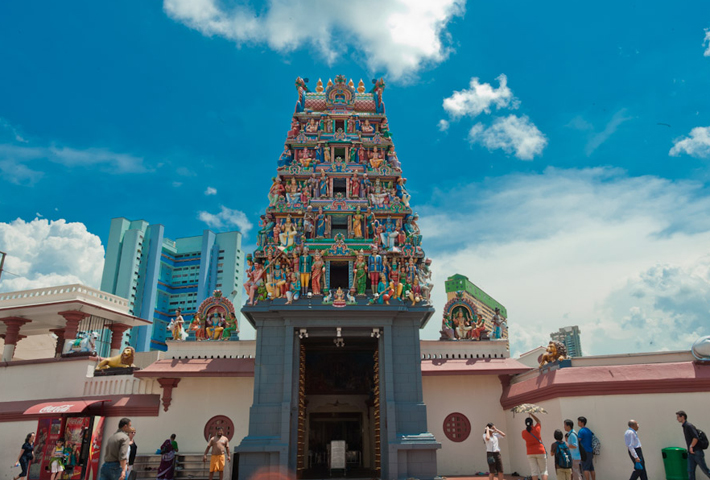 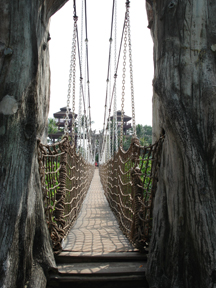 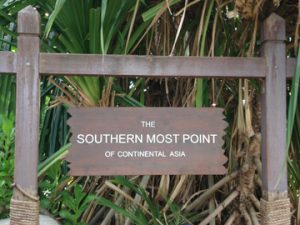 A few months ago I found myself standing at the foot of a rope bridge on the southern-most tip of continental Asia (or so the sign said). I paused for a moment before crossing the bridge, astonished at where I was – quite literally the other end of the earth. I was standing on the shore of the South China Sea on the southern tip of Singapore. I had traveled across the world to see this vibrant multicultural city-state, and to spend some time studying the design and architecture of a nation built under the influence of so many different cultures.

Singapore is a country that literally grew out of the jungle, under British rule, by the hands of Chinese, Indian and Malay immigrants. As it quickly grew to be one of the most important ports in Southeast Asia, Singapore attracted labourers and traders from across the continent. It is this diversity of people and cultures that helped create the dynamic mélange that Singapore is today.

Singapore has many personalities, but is first and foremost a cosmopolitan center that could rival New York or Chicago. The Central Business District is filled with glass skyscrapers, shopping malls, and impeccably dressed beautiful people. The city’s most conspicuous piece of architecture is the Marina Sands Resort, designed by Canadian architect Moshe Safdie, and reputedly the most expensive hotel in the world. The building is essentially a boat perched on top of three towers designed to resemble decks of cards. The boat structure, longer than the Eiffel Tower, houses an impressive infinity pool towering over the city at 650 feet above ground. The Singaporeans I met hoped this would become the city’s defining piece of architecture, like the Sydney Opera House or the Golden Gate Bridge. 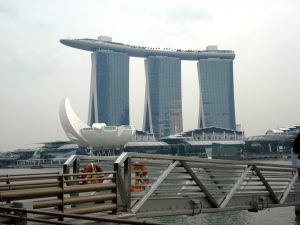 Peppered among the city’s skyscrapers are the last remaining vestiges of British colonialism. The neo-classical Fullerton Hotel is a stunning example, with its Doric columns and porticos crafted from Aberdeen granite. Built in 1928, the Fullerton building was home to the post office and other government offices, businesses and clubs before it was painstakingly restored and transformed into a hotel in 2001. I treated myself to a staggeringly expensive cup of tea in the lounge, but it was worth it just to spend some time gazing at the dramatic architecture. 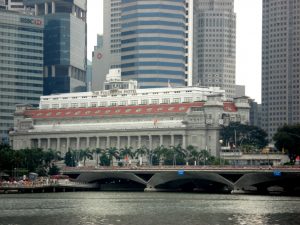 Not more than a few blocks outside the CBD I was immersed in Chinatown, a bustling hub of markets, food, boutiques and temples. In an unusual melding of cultures, most of the Chinese shops are housed in old colonial shop houses of British design. One of the most immaculate Buddhist temples resides in Chinatown, along with the city’s oldest mosque and Hindu temple. The Sri Mariamman Temple, designated a national monument, is built in the ancient Dravidian style of Indian architecture, and is a colourful tribute to Hindu’s many deities, with finely detailed plaster sculptures rising up on a tiered tower above the entrance. 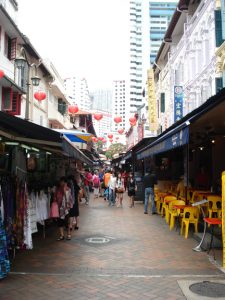 After a week in Singapore I had seen the beaches, the famous orchid garden, the tony shopping areas, the business district, Chinatown, Little India (with its fantastic textile shops), the Malay district, museums, galleries and more. While I was blown away by the glass boat in the sky, the shimmering detail of the Buddhist temples and the sculpture and colour of the Hindu temples, some of the most interesting design I saw was right in our own hotel. 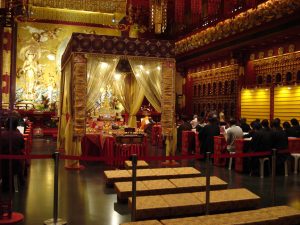 The New Majestic is a small boutique hotel located on a quiet side street in Chinatown. The lobby is a concrete structure filled with iconic mid-century furniture. Each room has been designed by a different artist and tells a different story. The rooms are over-the-top, funky, and wildly creative. Our room was covered in mirror with bronze butterfly sculptures fluttering about. It was a wonderful feeling to wake up each morning on the other side of the world, surrounded by such unusual and stimulating design. 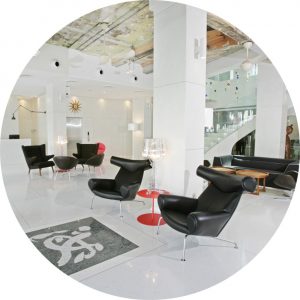